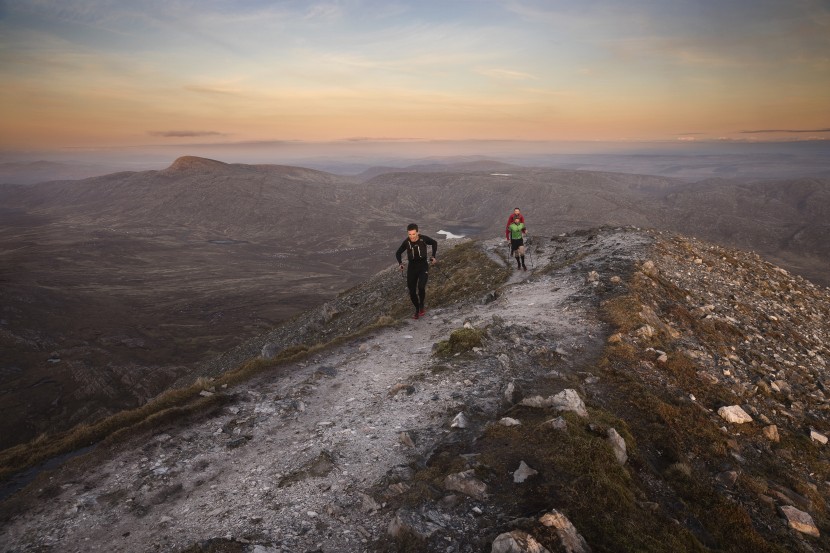 Donegal native Shaun Stewart & Galway native Lonan O’Farrell took on a challenge that not many even consider yet undertake to do, they climbed 26 of Ireland’s Highest Peaks, covering 32 counties in Ireland over 3 days beating the fastest known time of 87 hours 50 minutes by an amazing 27 hours and 15 mins.

On Thursday morning last Shaun Stewart & Lonan O’Farrell started their challenge at Mweelrea Mountain in Co. Mayo, they travelled the length & breadth of Ireland, covering every single county, climbed 26 of Ireland’s Highest Peaks, finishing last Saturday evening at the peak of Errigal Mountain in Co. Donegal when their time was recorded at an astonishing 60 hours 35 minutes.

It takes mental & physical ability for any athlete to take on an endurance challenge like this one, but these guys, proved that they were fit for the job. They knew that it would be challenging but they were determined to complete it and they did. Shaun & Lonan both took part in the 2017 Race adventure challenge last month & finished 2nd & 4th respectively.

They met over 4 years ago as competitors but quickly became great friends with the same passion and drive and last year they raced in the same team at the Itera Expedition Race another tough endurance challenge. Before the Race 2017, they knew they would like to undertake to do something else but together as a team and for charity. A challenge to beat the fastest known time by climbing all of Ireland’s 26 Peaks over 32 counties was probably the biggest challenge they could imagine facing & doing so this is what they decided to do, gathered an amazing team & they did it!

Commenting on the challenge Shaun Stewart said “ We knew that taking on this 32 counties – 26 peaks challenge was going to be a really tough test both physically and mentally for us both. Apart from the climbing and running, the major challenges we did face were lack of sleep and recovery time. Over the 60hrs 35mins from start to finish, both Lonan & myself had less than 4 hrs sleep. In order to set a really fast time it was necessary to go non stop, so eating and sleeping had to be on the go and in between climbs.”

Shaun & Lonan undertook to do this challenge not only to aim to beat the fastest known time but to raise money for 2 worthy charities. Our ladies Hospital for Sick Children & Play Therapy Centre, Lakeview School, in Co. Galway, a therapy centre where children in need of emotional or physcholgical help can get the support and therapy they require. The money raised to date for both charities has exceeded their expectations & they are overwhelmed by the generosity and support they have received from all over Ireland and across the world.

Commenting further Shaun said, “The weather was favourable over the 3 days and that meant that navigation was a little easier with clearer skies. We cannot believe how many of our adventure racing friends from all across the country turned up at different mountains to help pace and guide us. The support & generosity everywhere we went was unreal and to them we are so grateful.”

“Without a strong, practical & knowledgeable team behind a challenge like this, what we achieved & the record we broke could not have happened. The logistics and planning for this challenge was vitally important. We set out a very ambitious schedule and we managed to hit most targets. Our sponsors, our team & our crew made it possible to achieve our record time, delivering us safely to the start point of each climb, preparing food and keeping us motivated at every stage of every day and night, meant that all we had to do was climb the peaks and concentrate on the challenge.”

“We realise now that the challenge would not have run as smooth without the support of our organiser and main sponsor Donegal Oil Company’s, Arthur McMahon. Arthur’s input to the organising & logistics was invaluable. A true professional with a passion for what we were doing and with help from Rory Kennedy, they mapped out the fastest route for this challenge which took alot of planing time beforehand. Arthur & Shaun Doherty travelled with us for the first half of the challenge and then they were replaced by Denis Ferry & Leslie O’Donnell from Donegal Ice Road Trekkers who made sure we drove the planned & quickest route to each peak. We are so grateful to them all, they certainly looked after us & kept us on our toes! “says Shaun.

Lonan O’Farrell commented, “Manor Motors Opel Garage gave us an Opel Vivaro for the challenge, a fantastic addition to the team & it made our journey much more comfortable and ensured we had the space and a home to drive us to exactly where we needed to go. Alot of the time off road. We have to give a huge thank you to Colm Dillon. I’d like to say that the event was one that took a full on team effort. I had some pretty massive lows during the second day with major travel sickness and sleep deprivation. However, with help from the team and a big push I came through it and we enjoyed some really high points along the rest of the way. It is hard to explain my feelings when we were close to the finish but fantastic pride in the entire team, utter exhaustion and amazement at what we can do when we push ourselves, are a few that come to mind!”

Arthur McMahon from Donegal Oil Company & main sponsor for the event said “ Anytime you strap on a number and race head to head with others there is an amount of comfort in knowing where your opposition is. You can pace yourself and see how things pan out. With this challenge, there was no opposition so keeping the whole team focused on their performance could have been difficult. As it turned out the whole team functioned brilliantly. Shaun and Lonan are magnificent athletes, completely hard core. They maintained their determination, rested when possible, ate well when possible and, above all, kept their spirits up. The support crew, without whom this would not have happened, did an outstanding job. From setting off from Letterkenny on Wednesday evening, getting to the start line on Thursday morning, navigating to the 26 climbs over the 1800km of the trip and keeping Shaun and Lonan right, these guys were faultless. I’ve done a few things like this over the last few years and the thing that always impresses me most is how selfless the people who came out to assist us are. We had help from some of the best trail runners in the country, they came out at 2 in the morning, helped us navigate, showed us how to drive on the door handles in Molls Gap and generally cheered us on. To everyone who donated to our charities, thank you. To everyone who came out to wish us well on the journey or came together at Mount Errigal on Saturday night, thank you.”

Denis Ferry from Donegal Ice Road Trekkers commented, “We had planned a while ago that at 15.24 on the Friday Leslie O’ Donnell and I would take over from Arthur and Shaun at peak number 11, Kippure, Co. Dublin. We left Letterkenny at 11.30am and the hand over was complete at 15.23pm. Les and I thought how amazing the boys had done by sticking to the schedule with such accuracy. Arthur and Shaun Doherty had done a brillant job and they handed over the maps, gps units, a tidy van and most importantly two athletes who were in top form despite having been already 30 hours on the road. We knew that Arthur and Shaun Doherty did much more than drive and navigate, they encouraged Shaun and Lonan when no one else was there and kept spirits and their motivation flowing.”

“When we arrived at our first peak and Shaun and Lonan took off running the importance of us doing what we were there to do became much more real, after the previous crew setting the bar. The preparation pre event was kicking in with our van packed correctly so that everything was to hand and everyone had their place and equally important had their space. The mood in the van changed just like the mountains depending on the previous or next peak. There were stories told when spirits were high and silence when things were not going how we expected it to. But at all times one thing never changed and that was the common goal of succeeding. The team was tested early on Saturday morning because of a number of factors bumpy road, fatigue, sickness from Sligo through Fermanagh and Monaghan, but a 30 minute rest, a swift ham sandwich and a big portion of ‘you can do it’, the Guillion Peak, in County Armagh was summited. But more importantly moral was back where we needed it. Shaun’s Dad Patsy Stewart and his little 2 year old niece Cara’s Daddy, Ronan Murphy met us at this point and this along with our second wind, the rest of the peaks brought us closer to the finish. The Red Opel Vivaro Van bounced towards Errigal mountain with a great sense of satisfaction and the last climb was started at 20.05. Despite the boys being on the go 60 hours and 5 mins they managed to run to the top of Errigal in an astounding 30 mins and for the last time we heard ‘We’re at the top’ over our two way radios.”

“The high point for us was seeing the boys faces in the rear view mirror as we approached Errigal Mountain, the low point was finishing, because now it’s all over but our best point was everyone doing what they had to do and did so showing admiration and respect for everyone on the team.” concluded Denis.

“We would like to take this opportunity to thank our sponsors, Arthur McMahon, Donegal Oil Company, Colm Dillon, Manor Motors Opel our crew Denis Ferry, Paul Doherty & Leslie O’Donnell from Donegal Ice Road Trekkers, Rory Kennedy, Shaun Doherty, our families, our friends, everyone who donated to our charities, everyone who came & helped & gave us support along the way, the media for great coverage, Shane Young from Killary Adventure who supplied us with a boat to cross the Killary fjord, in Connemara, which added some excitement to the challenge and helped slice off a large chunk of travel time, Paul Doherty Photographer who climbed to the top of Errigal Mountain to capture amazingly stunning shots of our final challenge & finish, Grace Ann McGarvey for her PR, Media & Social Media coverage, Crumlin Children’s Hospital for helping us set up the online charity page, Play Therapy Centre, Lakeview School in Galway, everyone who made it to the final peak and celebrated our finish at Errigal Mountain, Co. Donegal on Saturday evening and just everyone who helped make this possible, gave us advice & huge support.”