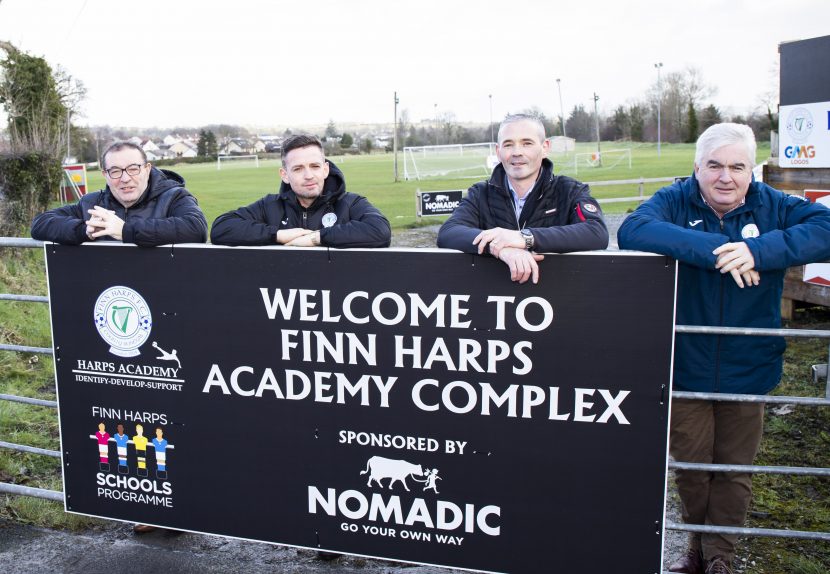 The Finn Harps Schools Programme and the Finn Harps Academy were pleased to secure their own grounds in Killygordon this year and even happier when NOMADIC offered to help by sponsoring.

NOMADIC are about bringing a little balance to every day which goes far beyond just their Yogurt to include supporting the local community and more. So sponsorship of The Finn Harps Academy Complex in Killygordon makes complete sense.

Alan Cunningham, Managing Director of Nomadic Dairy said “We are delighted to be official sponsors of this new development complex just a few hundred metres from where we are. We have known about the successful Finn Harps Schools Programme and Finn Harps Academy for a number of years and are pleased to help secure their future with our sponsorship. As a local employer we take an active role in our community so when we heard how hard it is for local programmes such as this to get funding or sponsorship we were happy to step in.” concludes Alan.

It is expected that hundreds of parents from across the county with children taking part in the Academy will descend on the new complex every Sunday from now until the end of October 2020. Throughout the School Term, Children from primary schools across Donegal will also take part in specially designed tournaments in the new Finn Harps Academy Complex, sponsored by Nomadic in Killygordon.

Commenting on behalf of the Finn Harps Schools and Academy, former Finn Harps Player and Manager of the Finn Harps Academy, Kevin McHugh said, “The Finn Harps Schools Programme and Academy exists to support children in the development of positive life skills. We have so many underage boys and girls throughout the county who would never have had the chance to participate in our soccer & eat right play right programmes and even though we visit the schools individually to provide this free programme, we are thrilled that through the support of Nomadic Dairy, our new complex and playing fields will be our new base for all Academy & Schools Tournaments and Activities. This project is unique and “one of a kind” in Ireland.”

“Our association with Nomadic Dairy has now ensured that boys and girls will have access to our new Academy Training Complex, which will also host underage National League Games. It’s exciting times ahead for us and we are delighted that long established businesses like Nomadic Dairy see our vision and want to be part of it.” concludes Kevin McHugh.