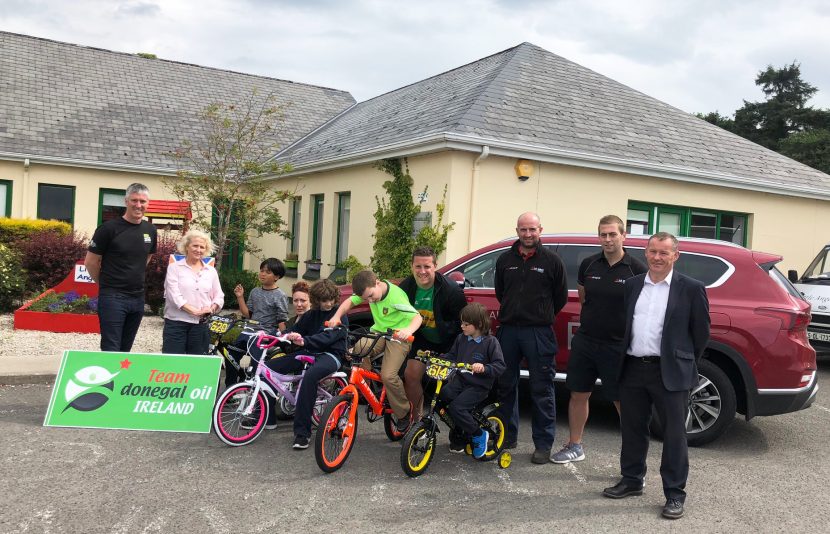 This week, the eyes of the pupils of The Little Angels School in Letterkenny lit up with huge excitement when Arthur McMahon from The Donegal Oil Foundation & Terence Diver from Divers Hyundai presented their School with four brand new bikes for the kids to #haveago at cycling in their school playground.

Last April, Arthur McMahon, Terence Diver & Barry Foley took part as a three person relay team in The Race which is a 250 km unsupported endurance event across the rugged landscape of North West Donegal and the 3 lads completed it as part of Team Donegal Oil. Terence Diver very kindly put up a prize of a drive in the passenger seat of Eugene Donnelly’s Hyundai i20R5 Rally Car in the hope that people could would donate to their chosen charity, The Little Angels School and whoever entered had the chance of winning this amazing opportunity at the same time.

The money raised went towards purchasing these four bikes locally from LK Bikes & they were delivered to The Little Angels School this week.

Speaking on behalf of The Little Angels School, Angela Keane said “We are absolutely delighted to receive these gifts from the Donegal Oil Foundation and as you have seen from the look on the children’s faces they were super excited. We would like to thank Arthur McMahon from The Donegal Oil Foundation and Terence Diver from Divers Hyundai along with Gavin & Mark from LK Bikes and to everyone who thought of our school when they were fundraising through their Team Donegal Oil event. Our children will look forward to taking on board the #haveago ethos and form their own little cycling club in the school now.”

Arthur McMahon, Founder of the Donegal Oil Foundation said, “Just seeing the eyes & faces of the kids today when they saw the bikes makes everything that Team Donegal Oil and the Donegal Oil Foundation do so worthwhile. We have so much more to give to local charities, schools & clubs just like this on an ongoing basis & I would like to thank everyone who helped make this possible including Terence Diver from Divers Hyundai who not only took part with Barry Foley & myself in the Race but donated the prize to enable us to raise money to purchase the bikes.”