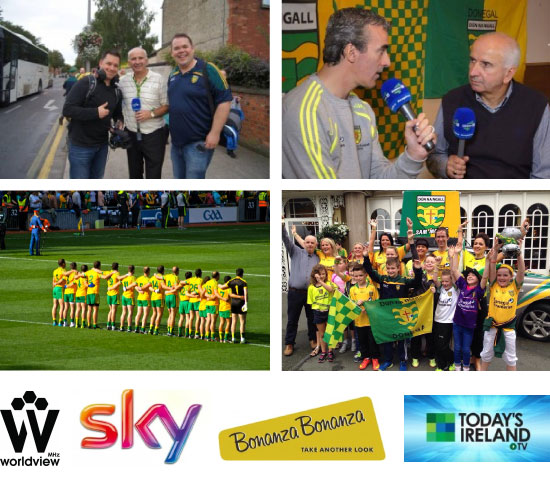 For viewers in Donegal, Ireland, & UK Donegal TV has announced that a GAA special will air this Monday on Sky Bonanza Channel 266 at 7-00pm. and for American viewers the special will air at 3pm on worldview & 5pm on MHz1 in DC.

Date & Times have now been confirmed for the Donegal GAA TV special with Charlie Collins for Donegal Viewers in Donegal, Ireland, UK & America. You will be able to view the DonegalTV programme via the Sky platform on new Sky Channel 266 which will be a new entertainment channel which launched on the 15th September 2014. The show will also be broadcast in America on MHz Worldview Todays Ireland service. visit www.todaysireland.tv

Dates & Times for Donegal GAA Special on Sky Channel 266 are Monday 15th @ 7PM and can be viewed again on Friday 19th & Saturday 20th @ 7PM . All content and full interviews will be also available to watch online @ www.donegaltv.ie after broadcast.
British based Canis Media CEO Clare Bramley is extremely enthusiastic about the new partnership ‘ We are delighted as a new Service provider on the Sky platform to be associated with Donegal TV in this very exciting time for the County. Donegal TV is now an established brand name and the programmes they have produced to date have been of the highest quality. We look forward to working with them in the long term and to showcase Donegal to a worldwide audience and we wish the Donegal senior and minors the best of luck on Sunday next’.

Today’s Ireland and the MHz network are particularly pleased with the quality and the content of the first American show from Donegal TV and the feedback from our viewers is very encouraging with many expressing a desire to visit Donegal on their next trip to Ireland” said Tony Culley Foster, British and Irish representative of the MHz network.

The all-island Ireland (North and South) content is cooperatively provided by television broadcasters and film producers who share a common desire to promote better understanding of a 21st century Ireland to internationally-minded American viewers of Today’s Ireland throughout the US” he added.

Shane Wallace from Donegal TV says that there will be an announcement shortly with regard to the next phase of Doneagl TV which will include weekly shows to be screened in Ireland, UK and the USA. “We have Donegal GAA special shows being aired tonight (15th September) in Ireland and the UK at 7pm on Sky channel 266 and in the States scheduled to be shown at 3;00PM ET on MHz Worldview & 5p ET on MHz DC1.