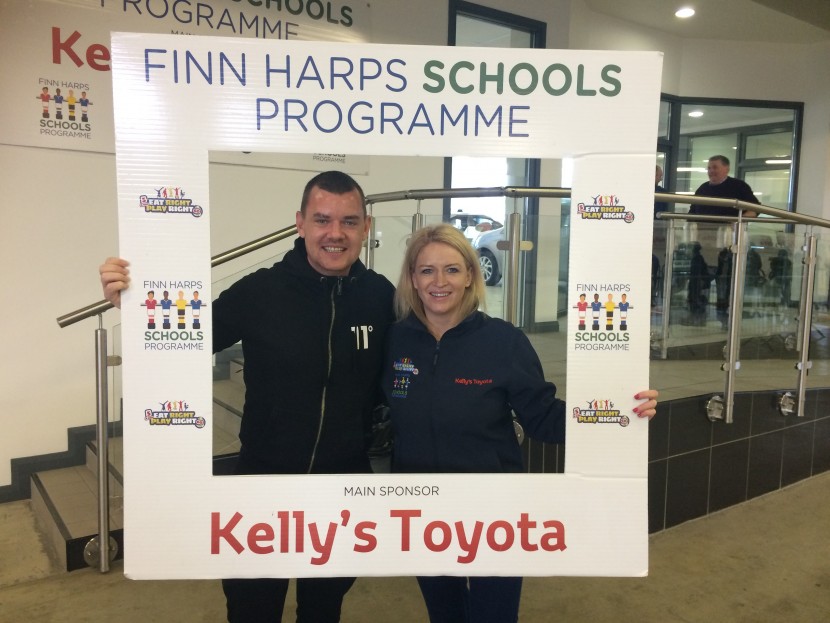 A great day was had by hundreds of Primary School Children last Saturday at the 2017 Kelly’s Toyota Finn Harps Schools Programme. Two very special Guests called in to kick off the proceedings Danny & Jamie O’Carroll otherwise known as Buster and Bono from Mrs. Brownes Boys.

Over 400 Children attended the event & the event organisers would like to thank their schools and their parents for taking time out of their busy weekend to attend. Some of the Finn Harps Players along with their manager Ollie Horgan, called in & they all joined in to show off their soccer skills & teach the kids some soccer tricks!

Speaking on behalf of the event, main sponsor of the programme & host on the day Brendan Kelly commented, “This is the 2nd year that we have held this event at our showroom in Letterkenny. Last year’s event was fantastic & this year it was an even bigger success. We as a company are delighted to have our Toyota brand associated with this programme. I see first hand how much work goes into

organising a calendar of events through the schools in the county who participate in the programme & the work that is involved in organising events like this that they can attend throughout the year. All of the

coaches & committee give more than a hundred percent to ensure that the children benefit from the programme, no matter what age or gender. It’s great for our company to be part of an all inclusive Primary Schools Programme like this & I would like to thank all of my staff who help out the committee at different events and especially on Saturday. I would like to wish all the school kids that will take part in the remaining calendar of events a fun & enjoyable time”.

John Campbell, Secretary of Finn Harps & Secretary of the Finn Harps Schools Programme, extended a huge thank you to everyone, “I would like to sincerely thank the school teachers for all their support, the kids and their parents who came along to the event on Saturday, the skills event organisers, Packie Mailey, Finn Harps Player, Chantelle Grant & Dessie McGlinchey, the coaches Sean Brennan, Stewart Connelly, Chantelle Grant & Michaél O’Dochartaigh who gave up their time on Saturday, the Finn Harps Players who came along to take part in soccer skills with the children, Ciaran Coll, Packie Mailey, Killian Cantwell, Caolan McAleer, Danny Morrissey, Ciaran O ‘Connor & Ethan Boyle, Emmett Lynch, Brain Over Brawn Charity, the businesses that came along Champion Travel, Century Cinemas, Body Fuel, ReNewYou and Amy Kinsella, who did a fantastic job on the face painting, Finn Harps Manager, Ollie Horgan for coming along to meet the parents & the children, Danny Nee, Photographer, Ernie Thompson, Finn Harps Head Steward who looked after Safety and Parking, Pauric Hilferty, MC & Music for the event, Brendan Kelly, Kelly’s Toyota, for providing the goodie bags and for hosting the event, Marie Cunningham, Kelly’s Toyota, who provided refreshments for the event, the staff at Kelly’s Toyota for their help in setting up the event, Donegal Sports Partnership, Donegal Road Safety Working Group, Danny & Jamie O’Carroll for kicking off the event, the local media for covering the event, and the committee members of the Finn harps Schools Programme, Paddy Harte, Chairman, Ann Marie Meehan, Principal St. Baithins National School, Myles Sweeney, Donegal Sports Partnership, Packie Mailey, Finn Harps Player & Committee member, Chantelle Grant, Committee Member, John Campbell, Secretary Finn harps & Committee member & Grace Ann McGarvey, for a lll her help in covering the programme events & providing PR & Social Media Marketing expertise. Without all of the talents of each of these individuals this event would not have been as successful. All of the children also got a ticket to a Finn Harps Home Game & we look forward to seeing you all in Finn Park soon” concludes John.

The Kelly’s Toyota Finn Harps Schools Programme supports primary school children in the development of positive life skills. They provide safe, enjoyable recreation opportunities where each child has a positive, rewarding experience while learning the basic skills and fundamentals of the soccer football, regardless of skill level and where each child will learn the importance of sportsmanship, leadership, teamwork, respect, and integrity while sharing with their coaches and teammates the emotions of success and failure. The Programme is now in existence for over 5 years and to date over 6,000 primary school children take part in the programme from primary schools throughout Donegal.